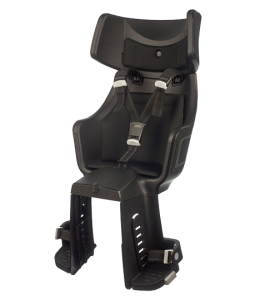 The Bobike Maxi Tour Bike Seat. Easy to install and fun to use but better suited for smaller children.

The mistake I made when I received this Bobike Tour Exclusive child seat was to assume it would take ages to fit on my bicycle. As a result it sat in the garage for almost two weeks until I had the time to tackle the job.

When I eventually got around to it, I was very pleasantly surprised to have it mounted on my bike in just 15 minutes. It was very straightforward and required only the one Allen key to complete the job.

This particular model is essentially made up of two components; a hardened steel fixing that you attach to the bike and a detachable seat for the child. The seat seems to be held very firmly in place and I can’t imagine it coming apart very easily.

My eldest daughter, who is almost five, was particularly keen to go out for a ride and so we found a suitable area with no traffic to test the Bobike. I confess that I was flummoxed as to how I was meant so safely get my daughter in the seat.

My bike is very basic and doesn’t have a stand that could have taken the weight while I lifted her in. What followed was a hilarious scene where I laid the seat on the ground and she laid down in it while I strapped her in. I then lifted child and seat on to the fixing and to my amazement got it in place first time.

In an ideal world I’d have got my wife or someone else to steady the bike while I lifted her in but there weren’t any responsible adults around to help me at the time. I would keep this in mind if you are interested in buying the seat.

I hadn’t used one of these seats before so wasn’t feeling massively confident at first. I repeatedly asked my daughter if she felt comfortable and safe and she reassured me she did. Having the weight of a young child on the back destabilised the bike, especially going uphill where I eventually chose to walk. In fairness, I think you’d get this with any similar product so I you can’t criticise Bobike for this and it was much easier on to ride on a flat road.

The Bobike itself seems very protective. It offers side impact protection around the head and you can strap your child’s feet in place which offers extra reassurance.

One issue I had was the shoulder straps coming undone. The anchors, which are detachable, are set very low in the seat and so they were slightly below the height of my daughter’s shoulders. As a result the left hand strap popped out of its socket at one point which wasn’t very reassuring. I was surprised at this as the product is designed for children up to six years of age but it seems Helen might be too big for it.

Ultimately this was the only criticism I could make. I haven’t had a chance to take our baby out in it yet but I suspect she’d get on much better in the seat because of her small size.

In summary, if you enjoy cycling this may be the product for you, but I’d recommend  it for smaller children. Expect to pay around £130. For further information about the Bobike and stockists please go to Bobike.com.

Interested in this product? Well why not see my recent review of the Lazer Sport P’Nut cycle helmet.