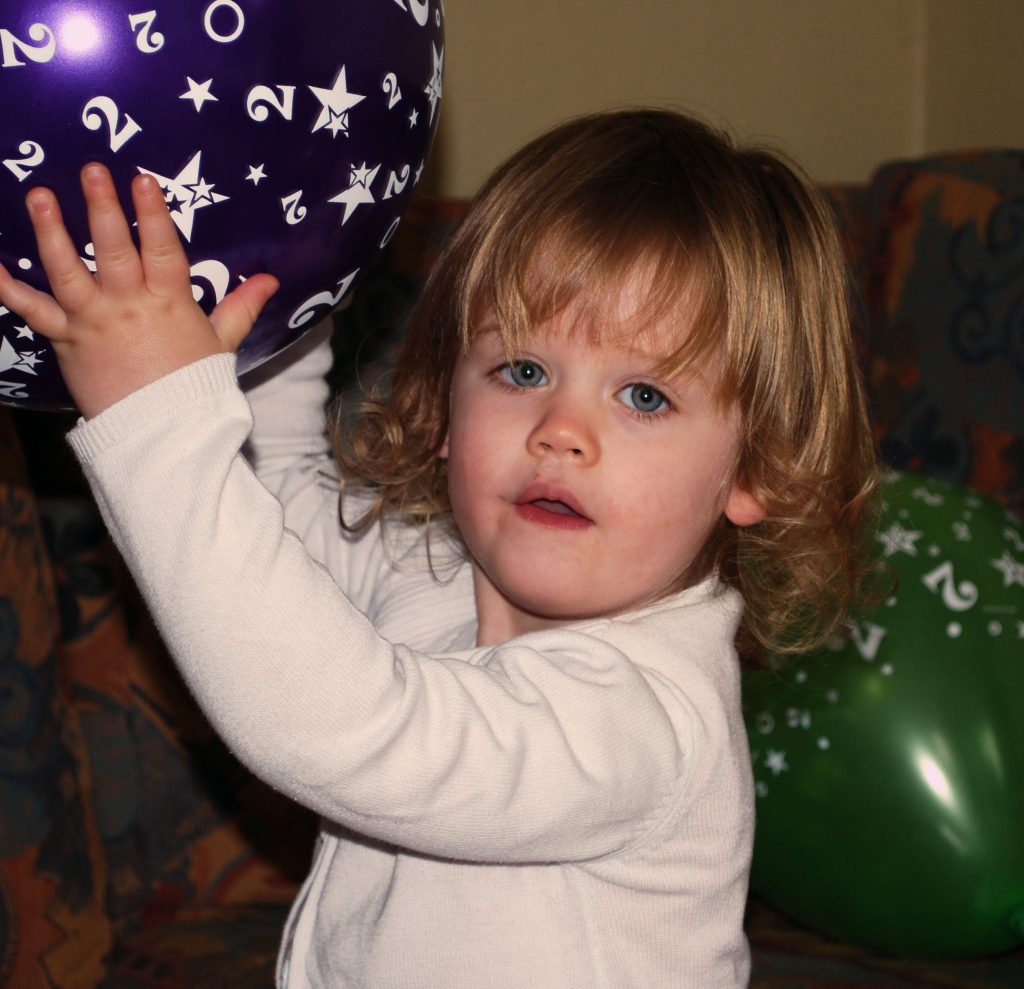 Izzy celebrates her second birthday party with a few family members and some balloons. Compared to her fifth birthday party, it was all so much easier.

After several years of fatherhood, you may be wondering why Izzy’s fifth birthday celebrations are causing me pain. Even if I say so myself, Mrs Adams and I are quite used to organising and hosting birthday parties.

A quick look back at old photos, like the one above taken at Izzy’s second birthday gathering, reminds me of more relaxed times. In fairness, I think all birthday party organisation creates some stress but this time stress levels are particularly high. I’ll tell you why.

Izzy is one of the oldest in her reception class at school. This will be one of the first parties held by any of her classmates. In fact, I have a sneaky suspicion it may be the first party at which her new classmates will gather.

It’s being the first that causes a certain amount of angst. As kids of her age do, she has given Mrs Adams and I, an absolutely massive list of kids to invite, around 30 in total.

These kids are very young and mums and dads will almost certainly stay. If we invited everyone, we’d probably have about 60 people in the room once parents were accounted for.

Don’t tell Izzy, but invites have gone out in batches and we’re gauging the responses before issuing the next lot. I don’t want to repeat mistakes we’ve made in the past where we’ve issued a huge number of invites expecting at least a third to decline, only to find everyone accepting and the resulting party become an unexpectedly large event.

As she’s so new to school, we don’t really know who her main playmates are. One kid she wanted to invite has left the school, a couple she wanted to invite she’s now saying she isn’t fussed about coming while another kid I thought Izzy was lukewarm about, she really wants there.

As you can see, it’s not entirely straightforward. There’s a risk we’ll miss someone out who she really wants in attendance.

With this being one of / the first birthday party of her school year, we have decided to splash out on a kids’ entertainer. This way Mrs Adams and I can mingle with the parents and leave the entertainment to a professional.

Booking the entertainer was the easiest part of this entire exercise. A phone call, an email an online payment and bosh, it was done.

Even so, this has created a further, albeit minor, cause of stress. We’re almost at the limit where we’ll have to pay extra so the entertainer can have an assistant. It’s an expense we could live without, but we’re committed now so if that’s what we have to do, so be it.

Although booking the entertainer was easy, securing a venue was not. It took quite some effort to find somewhere we could hold this party. In the past, we have held parties at home, but knowing we might have a large number of children and adults to accommodate, we thought it best to hold the party somewhere else.

I think the big difference is Izzy being in reception class. Last time she had a birthday party, I was the entertainer and the 10-ish friends who came along had to tolerate me overseeing a game of pass the parcel and about 300 rounds of sleeping lions.

Oh, now I think about it, there is one final cause of stress. After securing a venue, dealing with the guest list, discovering this is (probably) the first party any of her reception class mates will attend etc. we’ve discovered the venue we’ve booked has a strict no-alcohol policy.

With everything organised, it would be nice to have a glass of wine of bottle of beer with the mums and dads. I guess Mrs Adams and I will just have to save that for the evening when everyone has gone home.

Do you get stressed about birthday parties? Have you experienced Reception class party angst? Maybe you have a good tale of party organizational stress? If so, please offload in the comments section below.