My daughter’s recently started school and so have the children of many of our friends. Not surprisingly, conversation with our peers has frequently drifted to the subject of school, the differences between various schools, how our children are getting along and so on. 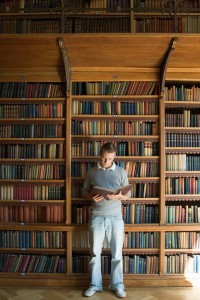 This intellectual looking male quite possibly wishes to help out at your local school but isn’t sure he’d be welcome.

Listening to all these conversations has made me wonder if schools might benefit if there was greater involvement from fathers. The comments I hear from friends generally revolve around what “mums” are doing, meet and greet sessions that have been set up for “mums” and so on.

To state the obvious, men are generally at a disadvantage when it comes to getting involved with school life because the overwhelming majority of them work office hours. They can’t volunteer during the working week and many struggle to do the collection and drop off at either end of the day so meeting the teachers and other parents can be difficult.

That said, the other day I took part in a school ‘clear up’ day. It was held at the weekend and parents were invited to help tidy up the grounds after the summer break. It attracted a large number of committed dads who enthusiastically gave up a few hours to do their bit for the school. All of them seemed to be very happy to be involved.

It got me wondering why more isn’t done to encourage men to get involved in school life? It strikes me there’s a huge amount of goodwill, skills and expertise that remains untapped because men either can’t get involved with their child’s school or won’t because they don’t, as men, feel welcome.

The lack of male involvement on Parent Teacher Association (PTA) committees also baffles me. Men are, without a doubt, partly to blame for their lack of representation on PTAs, but could PTA’s do more to appeal to them?

I’m not a huge fan of segregating the genders, but an occasional dads social evening might prove very popular, yet I’ve never heard of a school or PTA organising one. I have, however, heard of similar events being organised for mums (I should add that’s not a reference to my daughter’s school). If anyone has heard of such an event being organised for dads then please let me know, I’d be delighted to be proved wrong.

What do you think, would schools benefit from more involvement from fathers and how involved are dads in your child’s school? Do you think fathers are at a disadvantage when it comes to getting involved in school life? Alternatively, is the lack of involvement from dads their own fault?