Going to an event like Royal Windsor Horse Show (RWHS) with the family is always a gamble because you’re reliant on good weather. Thankfully on the day we visited there was glorious sunshine all day long.

The RWHS is held in the private grounds of Windsor Castle so it’s in a marvellous location. This year’s event was five days long (14 – 18 May) and featured four different kinds of competition; jumping, driving endurance and dressage. 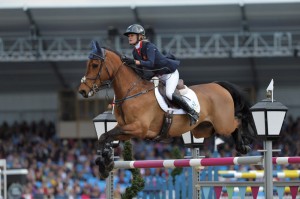 Don’t, however, feel that you have to be a horse-fanatic to fit in. The audience was clearly made up of beginners, fanatics and everything inbetween. Speaking to a few of the traders, I was left with the impression the organisers want to attract more families so I certainly wouldn’t be put off attending with young children.

As regards this family, I can’t claim to be a major equestrian. I have occasionally ridden horses, but my wife is the expert. She knows a huge amount about horses and was incredibly excited to be at the show.

So what did we get up to while we were there? Let’s start with the obvious; we saw various competitions. The first thing we saw was the Shetland Pony Grand National which started shortly after we arrived. This was a very entertaining, yet slightly bizarre, race held in the main Castle Arena.

We also took in several dressage competitions. I had to be married to my wife for a good few years to truly appreciate dressage. Several years into our marriage, however, and I have to say that I could watch it all day long.

For Mrs Adams, the highlight was the show jumping. She was particularly delighted to see Olympian Nick Skelton in action in the Castle Arena.

I wasn’t sure what our two kids were going to make of the competitions. I thought they were either going to play up massively or love it. I won’t lie, they had their moments, but bearing it mind it was a stiflingly hot day they were both very well behaved and seemed to love it. Our 18 month old thought nothing of toddling over to the warm up arenas where there were no crowds. This gave her the luxury of a ringside seat where she was more than happy to quietly watch the horses and the more friendly riders gave her a wave.

At one point during the show jumping Toddler Adams got a bit fractious. So that my wife could watch uninterupted, I took the little one off for a walk. While doing so we came across a Parade Horse Class competition in the Copper Horse Arena (see link to video below). The riding and tack was all performed in the correct Spanish style and it was amazing to watch.

Getting away from the horses, there are several other attractions. These included include a shopping area (apparently much improved on previous years), fairground rides and also a Land Rover driving experience. I was very keen to have a go in a Landy but I wasn’t persuaded the children would behave while in the queue and so I had to pass on that one. Maybe next year?

One of the nicest things about RWHS was that it was a manageable size with a relaxed atmosphere. With the exception of the Castle Arena, which attracted some very large crowds, we were able to let both the kids run around.

This was the first time we’d been to the RWHS. Having been the once, I think we’d seriously consider going again. The event is possibly better suited to children old enough to entertain themselves so next time we may see if toddler fancies staying with granny for the day. Don’t, however, be put off taking children as there is still lots for them to do.