With Father’s Day less than a month away, I’m being alerted to all manner of surveys that relate to dads. I have little interest in the majority but one caught my eye. To be honest, it made me feel a little sad.

The study of 1,000 Brits was carried out on behalf of grooming specialist Wilkinson Sword. It found that dads are very much in demand in times of need. It seems that huge numbers of people regularly borrow money from their dad, rely on him to cheer them up when feeling down and ask him for career advice (although interestingly only six per cent go to him for relationship / sex advice). 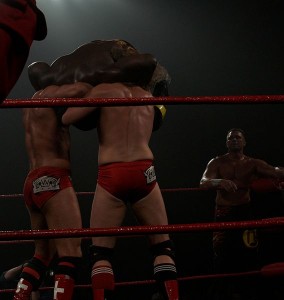 There are ways and means to hug your father and express your love. I think these guys are taking it a bit far. Photo credit below.

When it comes to expressing gratitude for these things, well, we’re just not very good at it. Believe it or not, a quarter of Brits feel too uncomfortable to say “I love you” to their father. In addition to this:

Okay, that last figure doesn’t come as a surprise to me. That number of Brits greeting their dad with kiss would always be low because, unlike Italy or France, men don’t greet each other with kisses in the UK so that instantly rules out half the population.

Cultural differences aside, come on people, give your dad a hug! Let’s be honest, some British men can be extremely shy of expressing their emotions but saying thank you or telling him you love him will only make him happy, I guarantee it.

I can’t imagine never receiving hugs from my kids. I know as they’ll get older they’ll become more reticent but I’ll be very upset if they are part of the 23 per cent who feel they can’t express their love for their father.

I reckon mums probably get more hugs, but I doubt they get any more thanks. I mean come one, being a parent is a notoriously thankless task, regardless of gender.

What do you think? Do you rely on your dad but fail to thank him? Do you hug him or ever tell him you love him? I’d be interested in your experiences and opinions.