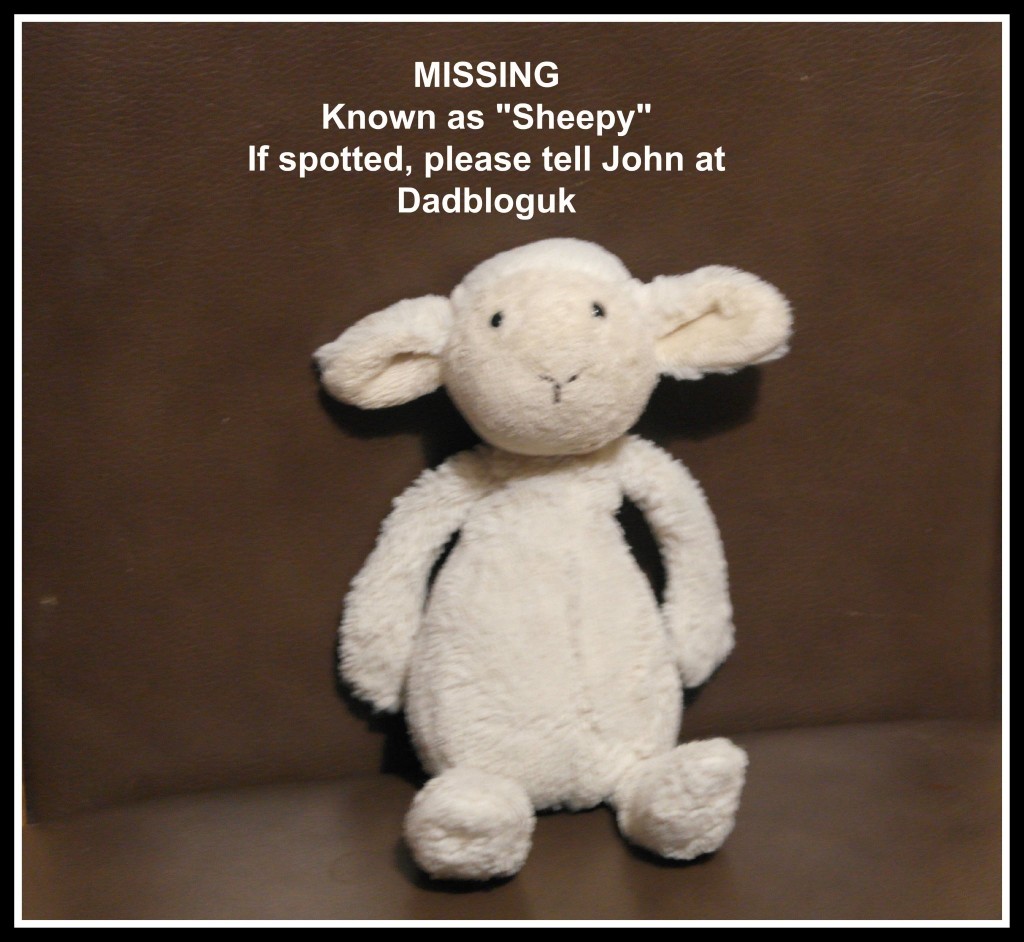 The Christmas period was the catalyst for some unexpected stress in this household. For some reason it reminded Helen, our eldest daughter, about a long-lost cuddly toy she used to take everywhere. At times she’s become very emotional, so much so that Mrs Adams has mounted yet another search and rescue mission in a bid to find it.

The toy in question is known as “Sheepy”. The original Sheepy came into our lives not long after Helen was born. These toys came in various different sizes and Granny bought the smallest as a small gift to welcome Helen into the world.

It very quickly became Helen’s favourite toy and so I bought several back-up Sheepy toys in case the original was misplaced. Unfortunately I bought the next size up in error. At this point Helen was less than a year old so she wasn’t really fussed. So long as she had a Sheepy with her, any Sheepy, everything was fine.

Over time, Helen formed a particularly stong attachment to one of these larger replacement dolls. Needless to say, it took more abuse than the others and having been pure brilliant white to begin with, it slowly but surely turned a unique shade of light brown (the picture above is not of Sheepy, it is one of the replacements, hence it’s white fur). Regular washes cleaned the muck off this toy but it was permanently stained.

Noting just how attached she was to this doll, I went out of my way to replicate the ingrained brown colour, just in case her favoured Sheepy was ever lost. I got one doll and stamped it into mud on a cold, rainy winter’s day and I left another Sheepy outside in the garden to get weathered.

In fact I carried out all sorts of experiments. None of them could replicate the distinctive brown colour the genuine Sheepy had turned. Being constantly handled by the young Helen Adams for two years had given the doll its own unique colour. No matter how often Sheepy was washed, he stubbornly remained the colour of your average Texel sheep.

I probably shouldn’t admit this publicly, but one weekend I even went so far as to tie a couple of Sheepy dolls to the underside of the car. I then went for a drive along a country road leaving them to bounce along the tarmac.

Even this extreme measure failed. I had always intended on washing the dolls after their journey in the countryside before giving them back to Helen. Alas, all the muck and filth they’d picked up from the road simply washed straight out.

You get the picture; Sheepy was irreplaceable. Several months before Helen started School in 2014, the dreaded moment happened; Sheepy went missing.

Sheepy would regularly disappear for a day or two and he always turned up in the house. As a result we were, at first, quite laid back about the whole thing. After a few days it became clear this was not a straightforward lost Sheepy incident and the family home was torn apart. In fact the house was torn apart on several occasions and numerous other lines of inquiry were followed up. None of them led to Sheepy’s return.

To this day he is missing in action. His name has regularly come up in conversation, but Helen seemed to have adjusted to a Sheepy-free life.

At Christmas time, something happened. I’m not too sure what the catalyst was, but Helen got very upset about Sheepy. There have been a couple of very emotional outbursts and even mentioning sheep is upsetting to her. Having seen posters pinned up in the neighbourhood for missing domestic pets, Helen has made several of her own. These posters have been distributed to her friends so they can join the search.

Mrs Adams, meanwhile, has started tearing the house apart again. In fact she has started her search in that most abused of places; the unruly and untidy cupboard under the stairs.

I have to say I think Sheepy is well and truly lost. Mentally, I have long accepted he isn’t returning. Even so, should any of you spot an 18cm, off-white lamby-style Jellycat doll lying in the street somewhere, please do get in touch for he has a home, he is loved and he is missed.

8 thoughts on “Missing; one cuddly toy”

PrevPrevious PostMen’s style; Wet Shave Club review
Next PostClothes suitable for nursery. Am I wrong not to care?Next