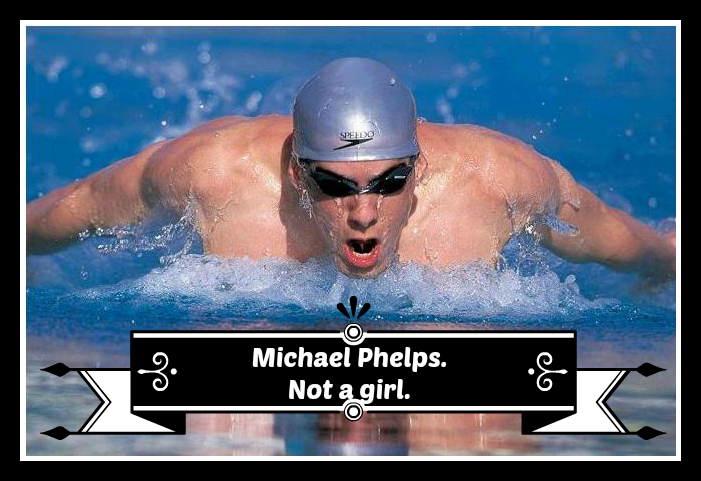 Michael Phelps; somebody taught him to swim.

Something’s been bothering me recently. It’s a little something that occurred to me a few weeks ago while taking my daughter to her weekly swimming lesson; very few boys were being taught to swim.

It may just be some freaky anomaly at the pool we attend, but I noticed a chronic lack of boys. There were a few in the basic, beginners class but that was it. There were none in the intermediate or advanced classes.

My daughter also does gymnastics. In the world we live in, where some tight gender expectations still exist, you kind of expect there to be a heavy gender imbalance. There are one or two intrepid boys in her class but otherwise, all female.

What, however, is going on the swimming pool? I’d never have assumed this was a girls-only activity. Based purely on my anecdotal evidence, this seems to be the case.

Swimming lessons are an interesting one if you’re a dad. As a stay at home father, I occasionally go to the pool with my toddler during the week in addition to taking my eldest at the weekend. During the week I can be the only guy in the pool with a kid but come the weekend, the dads come out in huge numbers. Swimming is one of those weekend activities that seems to have the word dad written all over it.

A while ago I got talking to a dad at the pool. He had a son in the same class as my daughter. He thought it was vital his boy learn to swim.

I clearly remember the words he said to me; “If my boy fell in the water and anything happened to him, I wouldn’t be able to live with myself if I hadn’t taught him how to swim.”

Interestingly, I haven’t seen this guy for a very long time. I have no idea if his kid is still receiving lessons but I assume not.

I only have daughters so I have no idea what goes on in the minds of boys in the 21st century. Are girls simply more enthusiastic swimmers? Do us parents think boys only need to learn the basics? Could it be some kind of body confidence thing; boys don’t like changing rooms?

I’m perfectly prepared to accept that our pool may be a freaky anomaly. I’d be interested to hear your thoughts none the less.