Some years ago an eight year old boy was called to front of the entire school at his weekly assembly to receive an award. What should have been a moment of celebration was one of complete humiliation for him.

The headmaster congratulated the young boy and gave him the award; a sew-on badge destined for his swimming trunks confirming he’d swum 10 metres. This was humiliating for the young boy because most of his classmates were swimming at least 25 metres, if not considerably more.

I was that young boy. After that school assembly experience, I rapidly rose up the ranks and was very soon swimming just as far as my peers, the badges on my spandex trunks confirming as much.

I had moved schools shortly before receiving my 10 metre swimming badge. My previous school had offered no provision to teach children of my age to swim so I’d never learned.

My new school had the opposite approach. It bundled the kids off to a nearby swimming pool from a very young age and so it was virtually unheard of for an eight year old pupil not to be a very competent swimmer. I think this emphasis on swimming may have had something to do with the fact that a very fast flowing stretch of the River Windrush was at the end of the school’s playing field! Not, however, that I recall any children going anywhere near it during school hours, a huge fence and hedges separating the school from the river. 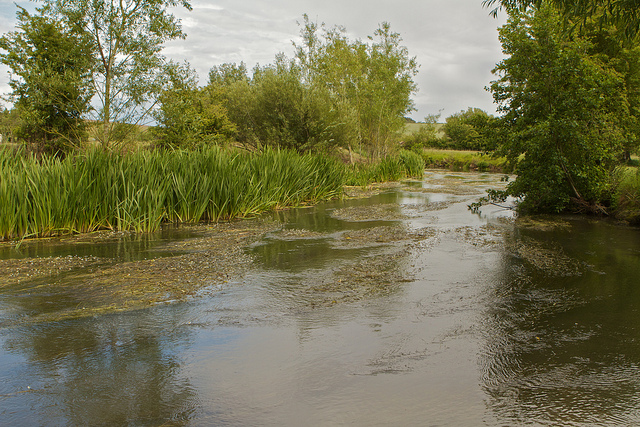 When a river like this can be found on the edge of your school, you are generally encouraged to learn to swim. Photo credit:Peter J Dean http://www.flickr.com/photos/rowanbank/

A few decades later and here I am, a dad of two. I’ve always been keen for my children to be competent swimmers from a young age. I used to take our eldest daughter, Helen, to a local pool on Thursdays to ensure she was confident in the water and encourage her to learn some strokes.

It was a wonderful experience. She loved going to the pool and would have a three hour nap afterwards. Yes, a three hour nap, it was blissful! Bearing in mind I took her on a weekday, I was always pleasantly surprised at how many dads were taking their kids swimming. I wasn’t the only one to notice. As my daughter and I left the pool one day an old lady stopped me and remarked at how good it was to see so many fathers swimming with their children.

Swimming became much more sporadic when our youngest was born. I’ve never fancied taking a baby and her older sister swimming at the same time. Controlling them both would be a nightmare.

Last weekend, however, Helen and I went to the pool and she successfully completed a few doggy paddle strokes and even a few strokes on her back. She was also more than comfortable diving under the water.

This is just the beginning. Helen must learn to swim properly for her own safety and so after our trip to the pool, I enrolled her on a 12-week swimming course, starting early in the new year. I’ll feel happier when she is competent and I certainly hope she and her sister get their hands on those swimming badges years before their father did.

As soon as Helen has learned to swim, it will probably be time to introduce her younger sister to the pool. If I’m lucky, she’ll be like her sister and have a three hour nap after each visit to the pool.