There I was the other day, wasting away my life on twitter when a particular message caught my eye. It highlighted a new report from the Bible Society that revealed knowledge of the classic Bible stories is diminishing through the generations.

The report’s findings didn’t surprise me at all. I know the overwhelming majority of my children’s friends receive no religious instruction at home. Truth be told, however, it did make me feel quite sad. 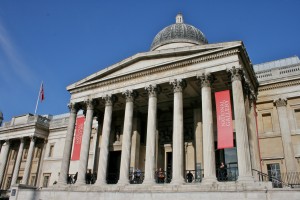 The National Gallery – great for religious art, but best avoided if you have young children.

Everyone’s upbringing is different, but in my early years I grew up in a household where the church was an influence. Not, I hasten to add, an overbearing influence (I didn’t once attend Sunday school and there was never an expectation I would).

Even so, the idea of growing up and not being familiar with classic tales like the Nativity, Joseph and his beautiful coat or the stories of Noah’s Ark is anathema to me. The Bible Society’s report, however, found 29% of children didn’t recognise the Nativity as being from the bible, while the figure for the other two stories was around 20%.

My children have been introduced to the Bible’s Greatest Hits. Ironically my eldest is particularly keen on the story of Daniel and the Lions. Ironic because I wasn’t familiar with the tale until she asked me to read it to her (and I’ve read it many times since).

Whether you have faith or not, these stories have huge cultural and historical value. A lot of people argue they are also great moral tales. I think the moral case can be overstated but there’s no doubt stories like the Good Samaritan or the Sermon on the Mount have enormous moral value.

Okay, so we live in a multi-cultural, multi-ethnic world and not everyone can be expected to have read the Bible or have had a Christian upbringing (be it nominal or practising). I simply feel it’s a shame such stories aren’t as popular as they once were. Apart from anything else, they are amazing stories that fire the imagination.

One of the best arguments I read for introducing your children to these biblical stories appeared in the Times a few years ago. You’ll have to forgive me because I can’t remember who the author was but it was an opinion piece written by a woman and, If I recall correctly, she had been an agnostic but in later life become atheist.

Despite her religious skepticism, she felt strongly children should study the Bible. Her opinion might appear highbrow to some. In essence she thought it a great shame that any child could grow up unable to interpret the biblical scenes depicted in the masterpieces hanging on the walls of the National Gallery. I haven’t been to the National for some time but that, to me, was a very compelling argument!