Trying to balance caring responsibilities with employment is never easy. Going back several years, I had a part time job that I left when my eldest daughter started school. I tried to make it work for several months but my stress levels became worryingly high, despite my employer being very understanding. 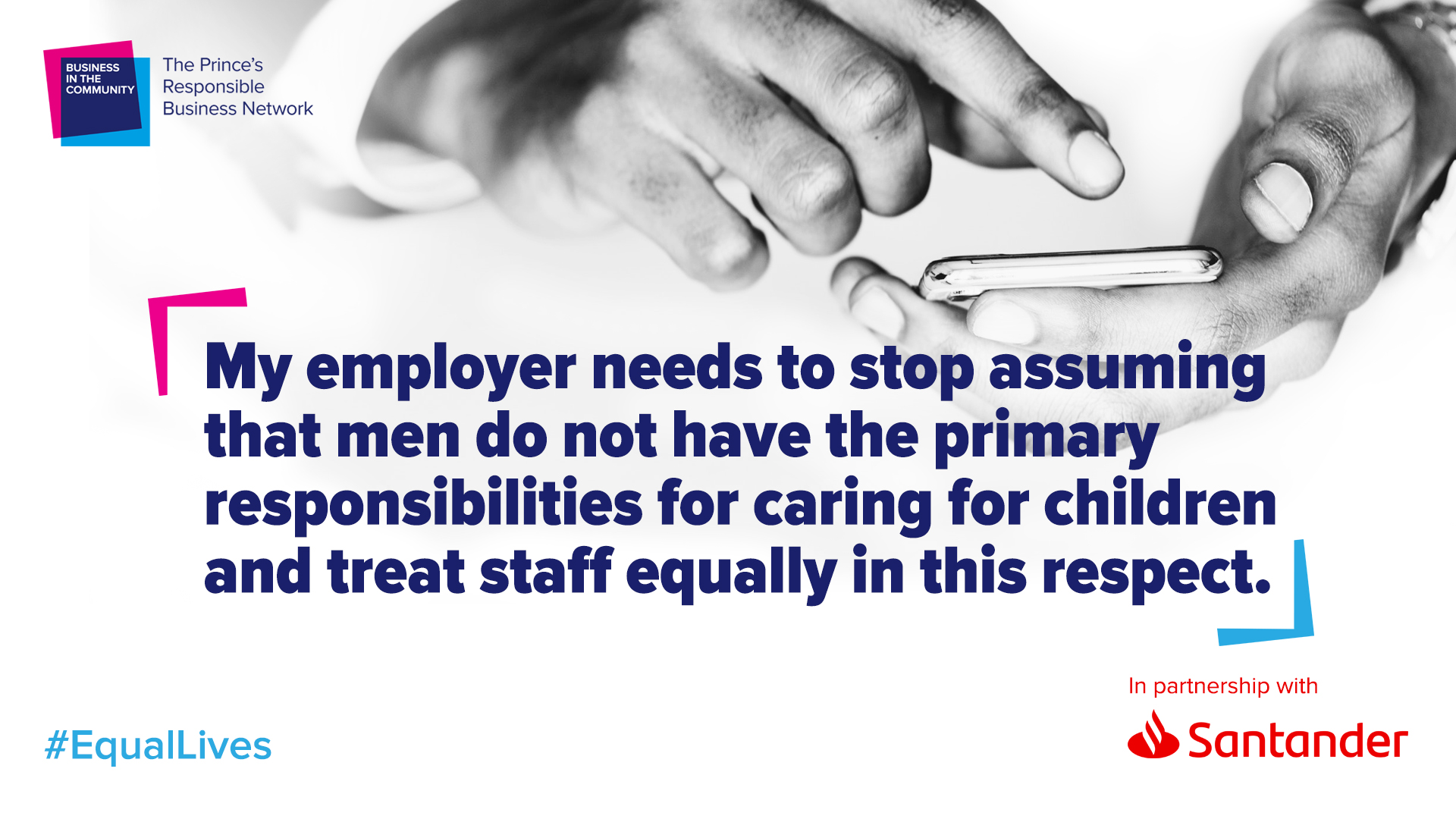 Men frequently have caring responsibilities, not simply for children but for adults as well.

A new report from the Business in the Community, a charity founded by none other than The Prince of Wales, has shown just how many people struggle with balancing work with caring for someone. Called the Equal Lives report, some of its findings simply confirm what we all know, while other findings are fascinating.

Attitudes to equality have changed, but where’s the action?

Equal Lives, which was also backed by the bank Santander, found that 85% of men think they should have an equal part to play in caring for children. Even so, women are eight times more likely to be the main carer for their kids.

This demonstrates one of the most important findings of the whole report. People’s attitudes have changed and the thought of a man being the main carer for his kids no longer horrifies people. Unfortunately, however, these modern attitudes have not necessarily led to change in the workplace.

Many men, for instance, reported they had concerns about asking for flexible working because it would have a negative impact on their career prospects. Men also said that their caring responsibilities are not as recognised and less appreciated as the caring duties of female peers.

“With the number of dependent adults rising and the proportion of men wanting to be more involved in childcare and caring going up, businesses need to catch up and recognise that if they don’t do more to support them, they risk losing talent.

“After the introduction of Shared Parental Leave, you may have expected the playing field to be more level, however only 2% of men have actually taken this policy. The Equal Lives survey showed why, 37% of men saying they did not take Shared Parental Leave because they could not afford to reduce their earnings, which rose to 48% of men under 35. We are calling on employers to make parent-friendly policies more accessible, more widely communicated and to appoint senior champions to create better visibility of male parents and carers in the workplace to normalise the caring responsibilities of men at work”

I’m sorry, can you repeat that please? 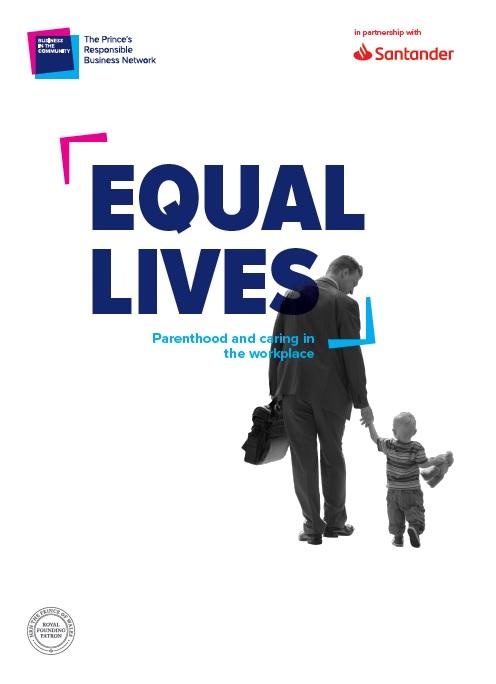 The Equal Lives report. Click on the image to read the report in full.

All this is sounding terribly familiar. Many reports have come to similar conclusions finding the workplace is generally geared up to women being carers while men fulfilling caring roles say they feel undervalued and frequently health issues. The Equal Lives report, however, contained a couple of facts that made for very interesting reading.

When it comes to men and caring responsibilities, the focus is very often on fathers looking after young children. As stated above, this responsibility is more often than not carried by women.

I don’t know about you, but that figure took me by surprise. I didn’t expect it to be so high.

The report offers a very interesting theory as to why we don’t hear about all these male carers (or indeed female carers as I don’t think they get the recognition they deserve either). The needs of adult dependents can be very complex and caused by illness or disability. Carers therefore frequently hide the fact they have caring responsibilities from their colleagues.

I found that desperately sad. There’s no shame in having to look after someone so why keep it quiet?

Added to that, the Equal Lives report found that employees who are balancing caring and employment experience higher levels of stress. This, in turn, leads to them wanting to leave their current job so the employer runs a heightened risk of losing valuable talent and the employee has the hassle of finding another job.

It would be easy to dismiss this as simply yet another report, but Equal Lives was a sizable bit of work. Over the past few months, 10,000 employees were asked about their experiences, aspirations and attitudes when it came to balancing work and caring for children and / or adults.

What needs to change? 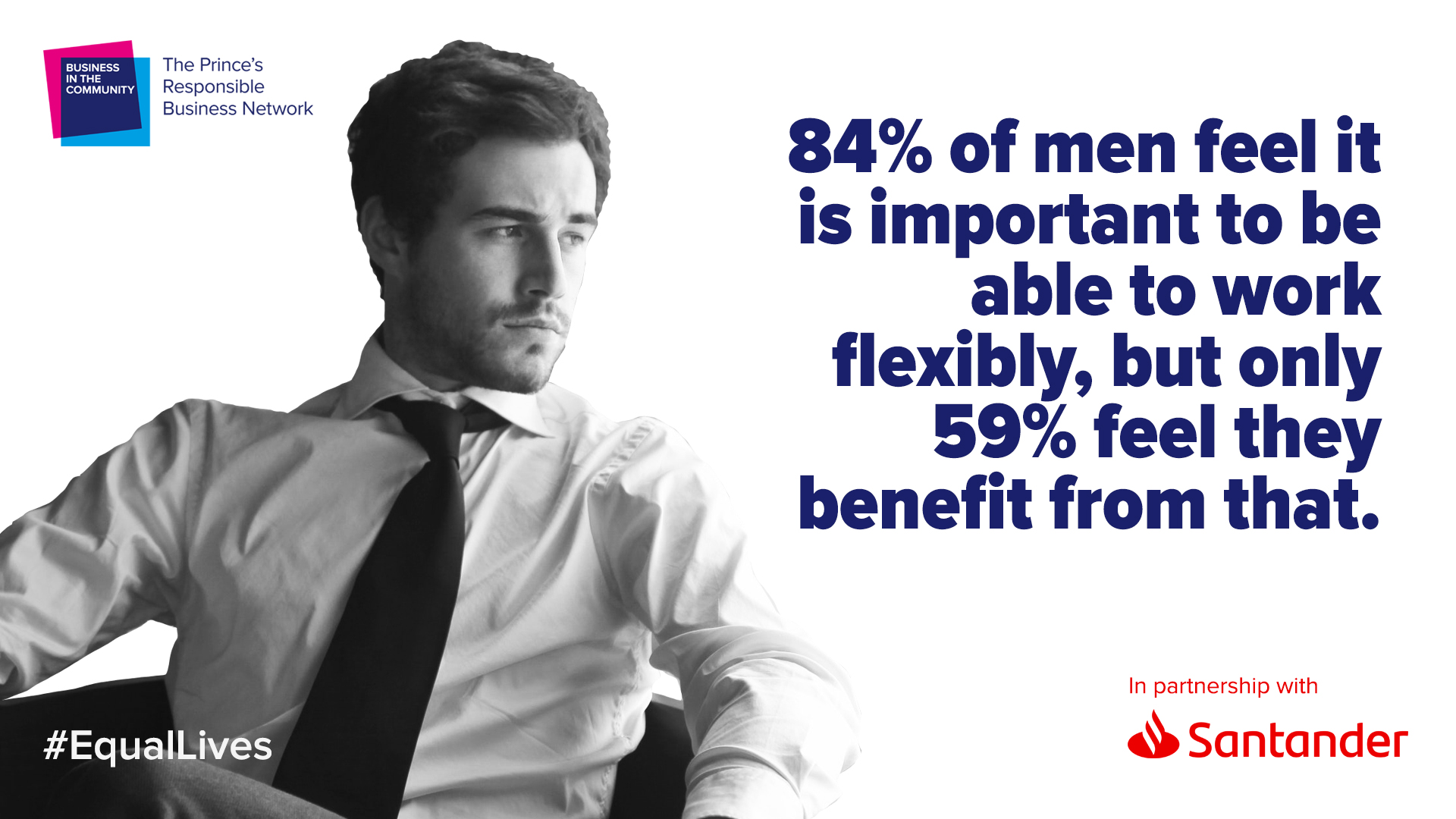 An issue that crops up time and again: Men struggle with asking for flexible working, concerned it may damage their career.

While tangible change may be slow in coming, it is happening. Same sex couples, for instance, have apparently forced employers to adopt new and more flexible approaches towards traditional gender roles. Even so, there’s much more than can be done.

Business in the Community is calling on the Government to make access to flexible working a day one right. It’s also proposing shared parental leave should be changed so both partners receive some ring-fenced leave. Companies should also be incentivsed to offer enhanced shared parental leave, maybe thorough tax incentives.

When it comes to employers, Business in the Community has made many recommendations. Among the many proposals, it says that:

Speaking as a dad who has been the main carer of his kids for several years, I think Equal Lives is correct. Attitudes have changed but there’s still a lot more positive action that could be taken. Based on this report’s size, I hope employers and other business groups take note.

I shall leave the last work to Santander UK CEO Nathan Bostock who summaries the situation very succinctly:

“Social attitudes to family and caring have changed substantially in recent years but it’s clear that many feel that their workplace hasn’t kept pace. No one should feel forced to choose between being a great parent or carer and having a great career.

“Businesses that want to attract and retain the best talent need to look carefully at how they can support all their employees to balance work and family life in a way that works for them and the business alike.”