Who doesn’t like to be hugged? Whether young or old, a hug can convey very strong emotions. Even so, a new survey suggests many dads struggle with it once their kids reach a certain age.

The survey of 2,000 dads based in the UK was commissioned by Fairy Non Bio. Its findings revealed that dads like to show their affection by hugging, but that one in five stop doing so once their children reached the age of 10.

Other findings from the survey include;

Fairy Non Bio has launched the #Neverstophugging campaign to encourage dads to appreciate the importance of hugging their offspring. The campaign has been backed by psychologist and neuroscientist Dr Simon Thompson. Dr Thompson said;

“Hugs impact on us in a variety of ways. At the physical level, they provide us with tactile comfort, softness, and closeness. At the hormonal level, the body’s natural chemicals are released for our emotional well-being and to protect us from harm; and the hug has become part of that in ensuring the necessary chemicals are released and regulated.”

A video has also been produced as part of the campaign. Called Learning to Hug, it shows the story of a father and son and how they expressed affection towards each other differently as they both grew older. The video is embedded below so have a look and see what you think.

In a further thread to the campaign, I was given the opportunity to ask Dr Thompson my own questions about hugging. I was very keen to find out if it was a positive experience for children to see their parents hugging and also what advice he may have for dads who may have irregular access to their kids.

Here is what I asked and Dr Thompson’s responses

“I believe that it is a positive experience for a child seeing a parent who they trust and love show affection towards another (their spouse or sibling) in the way of a hug. It is similar to seeing another person smile when the situation is happy. It makes you want to smile and be a part of the experience.

“See hugging and want to be hugged!”

“Try and meet up regularly with your son or talk regularly on the telephone – don’t just email or text but keep up the voice contact too. There is no replacement for a hug so try and meet up as often as you can.

“Be interested in what your son is doing in his life and ask questions when you meet up or talk together.

“Test out with a handshake whether or not your son is happy for contact from you. The more often you meet, the greater the opportunity for a hug. Remember to respect your son and if he is not willing to have the contact of a hug then you should respect this.”

“Hugging can often break down the boundaries of perceived loss and re-establishes the previous strong connection between parents and children. But sometimes it takes time and trust from the child, and it may take a few encounters before the child wishes to be hugged again by the parent.

“Hugging should never be forced upon a child; some children may have reasons for not wishing to be hugged and it is about respect and trust as well as reassurance that makes the hug happen and be successful in its goal.”

What do you think about this research? Does it tell the story of your family? Do you hug your kids more than your father hugged you? Just as importantly, do you like to hug and be hugged? 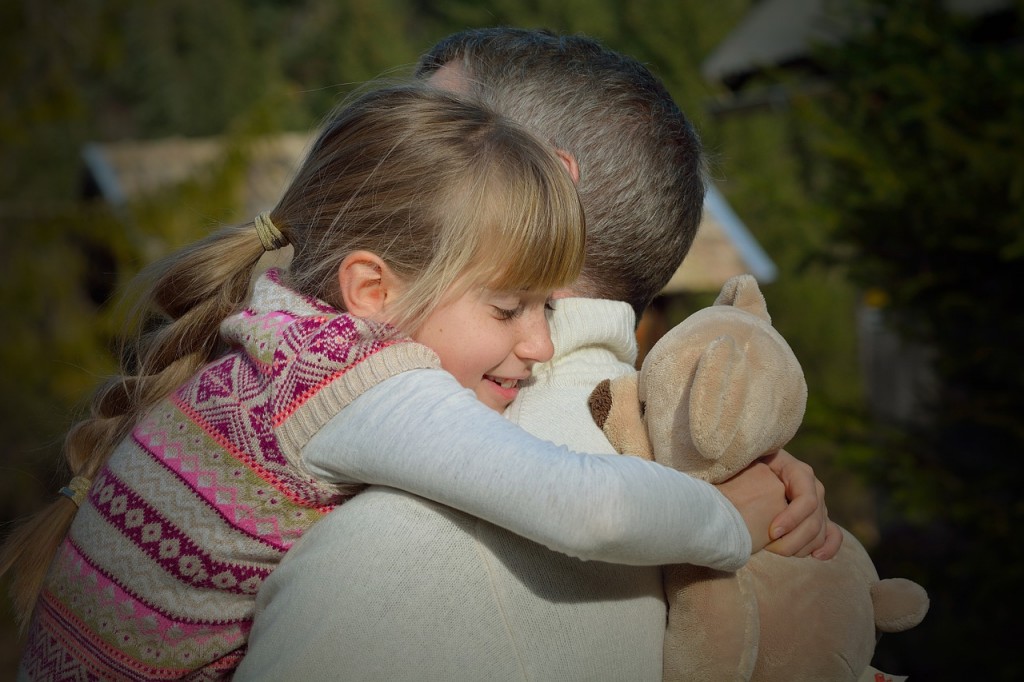 This post was produced in collaboration with a sponsor.

12 thoughts on “Hugging; #Neverstophugging your children”

AD - The most comprehensive guide to early fatherh