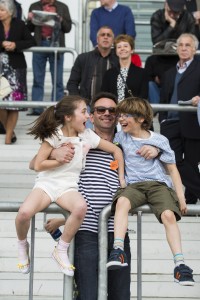 Enjoying the racing with the kids at Ascot

Having a day at the races is always appealing, but it’s not something I would ever have considered doing with the children. I was therefore delighted to hear that Ascot racecourse runs several “family days” each year.

Not only are these days out great entertainment for the family, but they can represent surprisingly good value for money. I thought a family day might be prohibitively expensive but it turns out under 18s go for free and entry to the grandstand for adults can cost as little as £15 per person (you will pay more if you want a private box).

We were invited along on Mother’s Day, when Ascot was holding its annual Country Fair Raceday. As a family we were all really excited at the prospect and we weren’t disappointed.

In addition to the racing, which I’ll come on to in a minute, there were a number of attractions that

you’d expect at an agricultural show. There was a falconry display, pony rides, climbing wall, soft play area, lamb racing (yes, you did read that correctly) and an air rifle target range. As it was Mother’s Day, a Mother’s Chill Out Zone offering massages and other delights was also available.

Ever the equestrian, Mrs Adams was more interested in the racing than massages so after checking out the country fair we returned to our private box to watch the racing. These are very spacious and an ideal place to base yourself if you are going to spend an entire day at the race track.

With your own private balcony, you get a fantastic view over the track.Rather foolishly I’d handed over my wallet to Mrs Adams to make all the bets as I was busy looking after our youngest. I returned to find a massive wad of betting slips all paid for with my cash. There were seven races in total and we didn’t win a single penny! 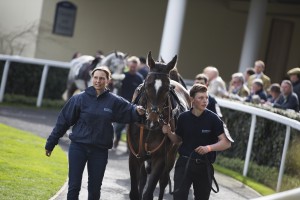 Horses in the parade ring prior to a race.

I can imagine some people being concerned by the formality of the occasion. On family days the usual dress code is relaxed so smart casual dress is acceptable with no dress code for young children.

Would we do it again? Without a doubt. The grown-ups enjoyed themselves and all the older kids (three years and up) seemed to have a superb time. I’ll be honest, at 17 months our youngest was possibly a little too young to appreciate the day but when she’s older we would happily return.

Ascot has family entertainments planned on several other racedays. These include: 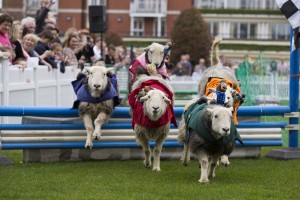 Sheep running on the Lamb National!

In addition to the above dates, the Red Bull Air Race World Championships will take place on 16-17 August. This will involve three rounds of racing with aircraft taking off directly in front of Ascot’s grandstand so it will be a race day with a huge difference.

I may very well see you at one of these events. Just don’t take my advice on what to bet on.