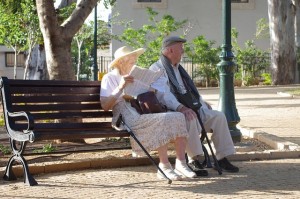 I’m not convinced I’ll have time to to sit down and read the papers in the sun when I retire.

According to a survey carried out for the Skipton Building Society, the majority of Brits consider retirement to be a positive thing. This is all well and good if you follow the traditional work pattern expected of your gender. What, however, if you’re like me and have followed a non-traditional route?

In total, 63 per cent of respondents viewed retirement positively. Only 11 per cent viewed it as negative.

As I say ‘though, I’m a stay at home dad and am therefore a bit of an anomaly. My work life will probably follow the typical pattern of most women. I’ll earn virtually no money at all until both my children are at school and even then will only be able to consider part time work for many years ahead.

Although I am planning for retirement, my finances won’t be as healthy as your typical father who will have worked full time all his life. I also have to accept that I’ll be heavily reliant on my wife’s retirement income.

Regardless of what my situation may be, I think the Skipton’s survey and those responding to it have made some assumptions that no longer hold true. The baby boomers had jobs for life and final salary pension schemes. These are both antiquated concepts. Unfortunately the majority of people erroneously think of what the baby boomers have experienced as the norm.

Add to this the fact that medical science and life expectancy is improving and the accepted view of retirement changes completely. As I’ve alluded to in the past, I was once heavily involved in pension poverty work. At the age of 33 I was privy to actuarial data suggesting the average life expectancy for a 30 year old would be 100 (and may I add that actuaries have consistently underestimated life expectancy for previous generations).

Consider the fact that our own children are going to have crippling mortgages and that childcare costs can only go north and the picture for my generation is very different indeed. Retirement at the age of 65 and going on frequent holidays just isn’t realistic.

That doesn’t mean I think of retirement as a negative concept. Far from it. I simply think the respondents to the Skipton’s survey are thinking like the baby boomers when this is no longer feasible.

I know some people will find that idea quite upsetting. Personally I think it’s great. I’m not really the sort of person that ‘does’ relaxation. I’d rather be kept busy in my sunset years and know that I am needed. I may need to change the name of the blog to Grandadbloguk.com, but I could live with that!

Photo credit: Image sourced from Pixabay. Photographer unknown. Reproduced under Creative Commons 1.0 agreement. For a link to the agreement and further information, see my Disclosure page.