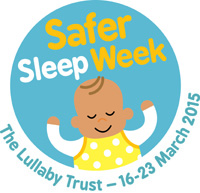 It’s Safer Sleep week. This is a campaign organised by a charity called the Lullaby Trust to raise awareness of Sudden Infant Death Syndrome (SIDS), the support available to families affected by it and, crucially, how to take steps to avoid it.

I was honoured to be approached by the Lullaby Trust and help it raise awareness of the campaign. It was, however, not a straightforward request as my family has been touched by SIDS.

My sister and her family lost a child to SIDS in 2006. I wish to draw special attention to the choice of words I used in that last sentence; “and her family.”

Something I would stress, is that when an infant passes away it has a devastating effect on the extended family. That’s a sentiment I suspect anyone affected by SIDS would probably agree with. In my experience it’s completely different to when someone in their seventies or eighties comes to the end of their life.

Before I could write this blog post, I had to check my sister, Mirjam (pronounced Miriam) was happy for me to do so. Her response was unequivocal; people need to know about this condition so scream from the roof tops.

This isn’t my story, Mirjam’s story or anyone else’s. It is the story of my niece, Lola Delalande.

Lola was born in February 2006 in New York City. It wasn’t the easiest delivery, but otherwise everything was straightforward.

She was born to my sister Mirjam and her husband Eric. They already had the one son, Bastian, and he was delighted to have a young sister. Everything progressed well in the first few months and Lola had no obvious health problems.

One June evening, Mirjam and Eric were visiting friends. Lola was asleep in a neighbouring room. Somebody went to check on her and noticed she wasn’t breathing.

Eric picked up his daughter and ran to the closest hospital. This is where Lola’s story takes an unusual turn. The medical team were able to revive her and she was placed on life support, but tests revealed there was no brain activity. Nothing further could be done, the support was removed and nature took its course.

Arrangements were made for a memorial service and I flew out to the States to attend. With close friends and family, I attended the chapel of rest. It was the one and only time I saw my niece. At rest she looked peaceful and beautiful. Even so, I won’t pretend it was an easy experience.

My sister has never got over the loss. I know I’ll cause no offence by saying that. I just don’t think you can get over such a thing. It also hit my brother in law very hard.

My nephew received counselling for a year afterwards. On one occasion I recall being outside with him at night time and he pointed up to the North Star. He told me that’s where his sister was, always in the sky.

Mirjam says she and her immediate family were surrounded by great people who provided moral and financial support. This was necessary as neither she nor her husband were in a state to work full time for quite a while. Unlike Batsian, Mirjam and her husband never received counselling. With hindsight this is something she feels they should have done.

When I became a father, I made sure we closely followed the advice about avoiding SIDS. I probably would have done anyway, but what happened with Lola had a huge impact on me and I made sure we stuck to the advice very, very closely.

So what is the advice the Lullaby Trust wishes to pass on? The main points are as follows:

There are things to avoid as well:

If you want to know more, please visit the Lullaby Trust’s website by clicking on this link.

As for Lola, no cause for her death was ever identified. I regularly think about her and I know she has a special place in the memories of all her family.

If you are the mum or dad of a new born, please do follow the above advice. I just hope that by opening up in this way, more people can be encouraged to take these very simple steps and reduce the likelihood of experiencing SIDS. Simply knowing that one person has been encouraged to follow the Lullaby Trust’s advice is enough for me.

11 thoughts on “Safer Sleep Week; a tribute to Lola”