Men Can Do It!

This is a fascinating book that explores why men in the twenty first century still lag well behind women in the amount of childcare they do. In equal measures Men Can Do It! is educational, informative and inflammatory. 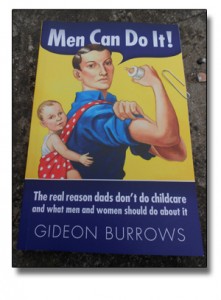 It’s worth noting that Burrows and his wife have developed a form of equal parenting that most couples would seriously struggle with. They have both sacrificed careers to work two and a half days a week. They even went to the extreme of developing a method of breast feeding in which Burrows would attach the baby to the breast at night, enabling his wife to carry on sleeping (it has to be read to be believed).

To get back to the matter in hand, Burrows uses a mix of in-depth analysis and anecdotes to show who really does childcare. Regardless of whether you are a hardcore feminist, hardcore masculist or a contented stay at home parent, the results make for uncomfortable yet enlightening reading.

Take, for example, Burrow’s analysis of the recent Office for National Statistics figures into the number of stay at home dads (SAHD) in the UK today. The figures were received with much fanfare by the media at the time as they seemed to show there were 220,000 SAHDs today compared to 190,000 in 2002.

Burrows has dug a little deeper and believes many of these men are actually looking after older relatives. According to his very convincing analysis, there are in fact only 92,600 SAHDs in the UK today, an increase of just 12,600 in a decade.

Time after time Burrows comes up with examples showing that men are just unwilling to take on any meaningful childcare role. He stresses that men have exactly the same legal rights as women to demand flexible working but they just don’t do it using a myriad of tired old excuses.

Many men also fail to take their full right to paternity leave and a surprising number, two out of five, do not get up in the night to tend to their babies. Burrows remarks that an acquaintance of his who had a young child simply commented “I don’t do babies.”

Women and mothers, however, do not get away without criticism. From the outset of the book he gives examples of women conspiring to keep men out of parenting. Often this has been by accident but occasionally it is by design.

One example that rang true with me is this quote from Janet Fyle, policy adviser to the Royal College of Midwives. In 2008 she remarked to Mother and Baby magazine that “Fathers are not a priority group and don’t need their own services. We mustn’t lose sight of the fact that the primary concern during birth is the mother and her baby.”

Note the language; “mother and her baby.” Where does the father figure in this? Thinking back to my recent experiences on a maternity ward, I can tell you that I had to leave the ward simply to use the lavatory or get a cup of tea. It may sound petty, but it does nothing to make the dad’s experience less stressful or enjoyable.

Fyle’s quote is just a bit irritating but this one, from The Baby Book; How to Enjoy Year One, is frankly insulting. The book states; “Fathers can be invaluable in supporting and caring for both mother and baby in the early days at home. You will be much better able to rest if your partner can make you tea or breakfast in bed.”

We do not live in an equal parenting utopia. There are, however, a lot of good fathers out there, many of whom did considerably more than make breakfast in bed following the birth of their child.

Burrows also argues there is a section of the female population that considers parenting to be a female role. That’s fine, he says, but they should perhaps consider going out to work a couple of days a week so their menfolk can look after the children. Women have, after all, successfully muscled into the formerly male domain of the workforce and have their own careers. It is therefore fair they step aside and allow men to prove they are just as good at childcare.

There are a few areas where Burrows falls a little short. Although he does talk about previous generations of fathers, I don’t think he’s done enough to recognise the enormous progress that has been made in a few short decades. Some of the stories I’ve heard about older men in my extended family are just unreal to a father of my age. The expectations on these older fathers were incredibly low and times have changed for the better. More could have been said in the book to reflect this.

Burrows concludes by making a number of recommendations as to what should be done to make parenting an equal business between mothers and fathers. I’m not going to list them here, suffice it to say he says the answer lies with men. Men must use the rights they have and men must demand further rights. Where necessary, he says, men should step in and prove to women they’re just as capable at changing nappies, bathing, cleaning up vomit etc.

There’s a huge amount I could write about this book. Suffice it to say that it’s well worth reading. You may come away offended, miffed or upset. You will, however, almost certainly come away in grudging agreement with many of the points Burrows raises.

Men Can Do It! By Gideon Burrows.Published by NGO Media. £7.99