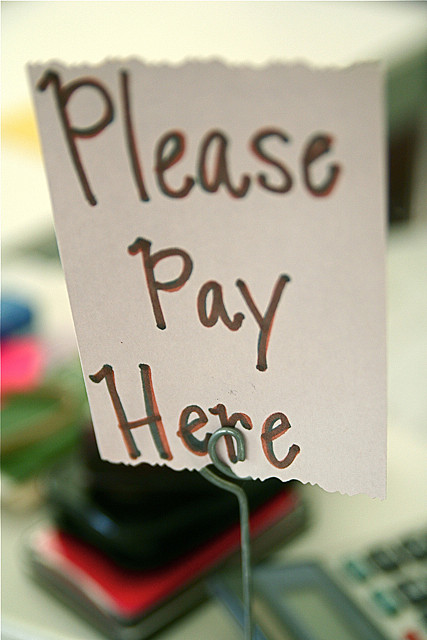 I’ve recently been reading the Not Dressed as Lamb fashion blog written by Catherine Summers. While the fashion tips and imagery Catherine produces are fantastic, these have not been the reasons I’ve been visiting the site. I am not, after all, a woman seeking “occasion appropriate” style tips.

#fairpayforbloggers
I’ve primarily been reading the blog because Catherine has done something very brave. She’s launched a #fairpayforbloggers campaign and suggested that bloggers, in particular pro-bloggers, should get paid for writing reviews.

Purely by chance, Catherine’s campaign has coincided with several requests for my assistance to promote products or services. I’ll go into more detail about just two of these requests in a moment. Suffice it to say they would have required effort on my behalf, immense effort in one case, and yet I would not have been paid a single, solitary penny.

These requests have been just enough to tip me over the edge. Inspired by the #fairpayforbloggers campaign I am in the process of updating my reviews policy. I’ve always charged for hosting certain content, but the time has come to be much more consistent in how I do it.

As a former journalist, I struggle with the ethics of being paid directly for a review. Readers may feel you’ve ‘thrown’ the review in return for cash.

The truth is, times have changed and bloggers are a massive part of the media mix the PR industry must engage with. So long as a well written and transparent disclosure policy is in place, I don’t believe there is any conflict of interest if a blogger is paid for the administration of a review, or content such as a giveaway. In other words, an organisation pays a small fee for a guaranteed publication date, anchor text and an agreed number of mentions on social media.

This is essentially the model Catherine has adopted with Not Dressed as Lamb. I think it makes huge sense. It’s a guarantee for both parties; the blogger knows they’re not being exploited while the organisation seeking publicity is guaranteed to receive the exposure they’re looking for.

Of course the option is there for any company to send a review sample and not pay a fee. In these circumstances they take a risk. The blogger may choose to write a review but nothing is guaranteed. If the blogger chooses not to, they shouldn’t be on the receiving end of complaints.

That said, allow me to shed a little light on two of the requests recently made of me. I think they illustrate quite clearly why things must change.

There is no budget to pay you
This isn’t an example of a review but a sponsored post. I was approached by an agency and asked to host content on behalf of a limited company that operates in the public sector. As is all too often the case, there was no budget to pay me. I will dedicate page space to charities free of charge, but not limited companies.

I did a little research and discovered this company is owned by a private equity investment vehicle. It is also valued at £103m and posted a pre-tax profit in 2012 0f £3.5m.

I sent an email back to the agency explaining all of this. I also asked it to find some budget. You won’t be surprised to hear I haven’t received a response.

The test drive
This is a particularly interesting example. It demonstrates the confusion that still exists in some quarters between salaried journalists and un-salaried bloggers.

As you may have gathered from the heading, I was asked by a car manufacture to test drive one of its vehicles. It would have involved travelling to a major European city. This jaunt would have taken place mid-week in school term time and I’d have been away from home for the best part of two days.

That would have meant two days away from the keyboard earning no money. Added to this, I’d have needed to arrange and pay for additional post school / post nursery childcare for my two young daughters while my wife was at work.

I asked about the possibility of being paid a small admin fee and for childcare costs to be covered. The total childcare costs for both kids would have been something like £60.

The response was very telling. I received an email explaining that I and the “other journalists” would have travel and accommodation fees covered but that was it. I was very unimpressed at the comparison with journalists, not to mention the issue of childcare costs.

I had no option but to decline. To agree would have led to an interesting conversation with my wife; “Darling, I’m going away on business for a couple of days. I won’t earn any money and you’ll be looking after the kids solo for two evenings. Oh, and by the way, we have to pay for the extra childcare costs.”

My wife’s Glaswegian. I can assure you her response would have involved the colourful language her kin are famous for.

Bloggers are not journalists
Lumping bloggers and journalists together shows a lack of understanding as to how we operate. The overwhelming majority of pro-bloggers are running small businesses and are not backed by huge publishing houses with a variety of income streams.

We are, however, an influential bunch. If companies want us to promote their products to our readers, well, it must become standard practice to make it worth our while. The opinions we provide are trusted, down to Earth, from the heart and take hours of effort to write and promote. We can only be expected to do so much without some form of recompense.

It’s time for change
I applaud Catherine for launching the #fairpayforbloggers campaign. I don’t think pro-bloggers should be paid for reviews, but should receive something for administering various pieces of content, be it reviews giveaways and so on. In return for a fee, however, we must deliver. This approach would benefit everyone.