Some thoughts on the ‘State of the World’s Fathers’ report

Today is a significant day for anyone interested in fatherhood and gender equality. Why is it so important? Well, the first ever State of the World’s Fathers (SOWF) report has been published.

This is a study overseen by MenCare, an organisation active in 30 countries and backed by the United Nations. MenCare’s mission is to; “promote men’s involvement as equitable, non-violent fathers and caregivers in order to achieve family well-being, gender equality, and better health for mothers, fathers, and children.”

Having trawled through data and material from across the globe, the report has found that encouraging men to be involved fathers has massive benefits for mothers, fathers, children and wider society. In hard-hitting words, the key finding of the study was that men are as hard-wired to provide childcare as women. It also said fathers with a close connection to their children;

On discussing the report with a friend of mine, he said; “Doh, did someone really need to produce a report to conclude that?” It all sounds like common sense, but Government policy, rigid gender stereotypes (not to mention the attitudes of some men and women) clearly stop fathers from reaching their full potential. 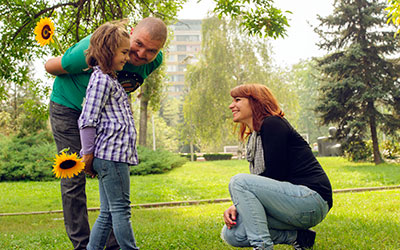 The report hasn’t pulled any punches. Depending which nation a woman lives, she is likely to spend between two and 10 times longer on caring responsibilities than a man. In fact there is no country where women and men share unpaid domestic and caring duties equally. For the record, women make up 40% of the formal global workforce so the majority are balancing paid employment with these unpaid duties.

The pragmatist in me says this disparity in domestic / caring duties is hardly surprising, especially in the early stages of a child’s life when they are being breast fed. Mum is in the unique position to provide breastmilk and so she is likely to end up doing most of the childcare.

Even so, simply accepting this is the case sends out completely the wrong message. It shuts men out of their child’s life from the start and it’s much harder to get back in later on. Men are quite capable of getting up in the early hours and carrying the hungry baby to its mother and can bottle feed a child. They are also more than capable of soothing children, playing with children, changing nappies or undertaking any of the activities that come with looking after an infant.

Let us not forget the own-goal scored by La Leche League in 2012 when it successfully campaigned to get a brief clip of New Zealand All Black rugby star Piri Weepu cut from an anti-smoking commercial. The League’s reasoning; it showed him bottle feeding his six month old daughter. Although it may have been unintentional, such an uncompromising approach suggested that men should leave raising children to women (oh, and just to add insult to injury, Weepu’s daughter is apparently allergic to dairy so had to be formula fed).

MenCare believes that parental leave policy could make a huge difference in making caring and homeaking more equal between the genders. Where parental leave and pay is more generous, men are considerably more involved in family life. Iceland is used as a good example, with men taking on average 103 days of paid leave following the birth of a child. It is, nonetheless, noted that Icelandic women often take three times as long as this.

In the United Kingdom, it was found that fathers who took leave after a child was born are 19% more likely to participate in feedings and to get up with the baby at night eight months to a year later, as compared with fathers who did not take leave. A study from Sweden showed that every month a father took in paternity leave, the mother’s income increased by 6.7% when measured four years later (more than she lost by taking parental leave herself).

With Father’s Day upon us, the timing of the report is very apt. What, however, does the future hold?

As far as the UK is concerned, I don’t feel hugely optimistic for change at Government level. Shared Parental Leave (SPL) only came into force earlier this year. I have heard of isolated examples of men and women exercising these new rights, but, as many commentators predicted, it does seem to have been an evolutionary and not a revolutionary step, albeit a welcome one.

SPL was championed by the Liberal Democrats in the last Government. Even so, former Deputy Prime Minister Nick Clegg admitted during a meeting with this blog that further legislation would be required to get men to take the leave entitled to them. Tellingly, these comments were made six months before the legislation came into force.

With SPL only coming into force in April, the new Government seems to have other priorities. Even so, a report like this shows the importance of men being involved fathers and, with 80% of men from across the world expected to have children, how important it is for them to be encouraged to get their hands dirty at the centre of family life. In other words, there is a long way to go to achieve equality on the domestic front and men and women stand to benefit massively if we can stand together and make it happen.

Gary Barker, one of the SOWF’s authors said; “This first State of the World’s Fathers report reaffirms that fathers matter for children and that caregiving is good for fathers. We want to begin to lay the groundwork to influence future policy and programmes around the world that address the current lack of men’s and boys’ equitable participation in caregiving, and that address rigid ideas about gender, and the harm that these issues bring to women, to children, and to men themselves. Gender equality requires a revolution in the lives of men and boys, including their full participation in domestic life.”

MenCare plans to make the State of the World’s fathers report a regular occurrence. Here’s hoping for signs of positive change in time for the next one.

PrevPrevious PostTwo kids, one huge bar of chocolate. What happened next?
Next PostKeeping your hands clean with PumpPalNext